We're just a few short days away from CONvergence 2012. As always, it looks like it's going to be really massive, and there's a lot of blood, sweat, and tears that have gone into this year's convention.  The volunteers who help run it and keep it going do a lot, as well as everyone else who attends.

There are a lot of things that I'm looking forward to on the Schedule.  Three highlights of mine:


I'm sure that I could list another half dozen items, but that's just a great start.

My own schedule consists of:
I'll also be a part of Opening & Closing ceremonies.

It's going to be an epic event -- we're going to have over 5,000 people there, and hundred of people will help pull together to make it happen.  Hope to see you there.

Chicon 7 and the Minnesota Magpies

One of the things I've been working on this year is Chicon 7, the 70th World Science Fiction Convention in Chicago this upcoming labor day weekend.

One really exciting part of this is that several of us are planning a party suite at the convention to celebrate Minnesota Fandom, and to be an outpost for our communities.  That's especially true for people that might not have attended a Worldcon before, or as a place to gather together.  We've got representation from CONvergence, Geek Partnership Society, Mn-stf, Minicon, Minneapolis in 2073, The Seamstress Guild, and I really welcome representation from across Minnesota-based fandom.  I'm very proud of what SF&F Fandom has built in Minnesota, and want to represent that when Worldcon is as close to Minnesota as a Worldcon is ever likely to be anytime soon.

One part of this is that Joel Philips, Minicon's current chair and the head of consuite at Chicon (so we know it's going to be awesome), made a call out for people when making a room reservation at the Hyatt, so all of the people that wanted to be together in a late night party atmosphere with Minnesota fandom connections could be together.  As a party of that, besides telling Joel, we referenced Magpie on our hotel reservations form.  So we referred to this as "Minnesota Magpies", and I made some ribbons using a logo that Emily Stewart put together that I used at Minicon and also plan to use at Chicon to identify people participating in the room.

I wanted more than just a ribbon though, so I went ahead and created a Cafepress store so I could create a shirt and apron with the Minnesota Magpie logo, and I thought I'd open it up to other people to order shirts or any other material that they wanted. 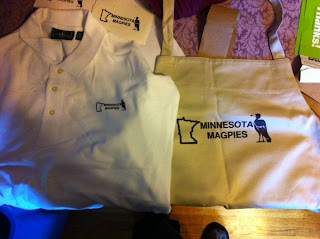 One of the advantages of this is we can offer a pretty ride range of choices to people without encouraging any set-up charges, because out budgets won't allow that.  But if people order from this store, some of the money will go back into making sure that we can afford the suite as a group, as well as helping all of the groups participating with getting the food and drink that obviously we want in a good party room.

I'm really excited about this.  I definitely have my own magpie tendencies, and I'm really looking forward to a great experience at Chicon 7.  Minnesota has a varied and diverse fanbase here for Science Fiction and Fantasy and all of those related Geek Culture things -- we've got a number of conventions that have run a long time, and there are more organizations, groups, and activities than anyone can track.  So this is one part of celebrating and having a lot of fun.

So if you're interested in Minnesota Magpie stuff, please check out the store!